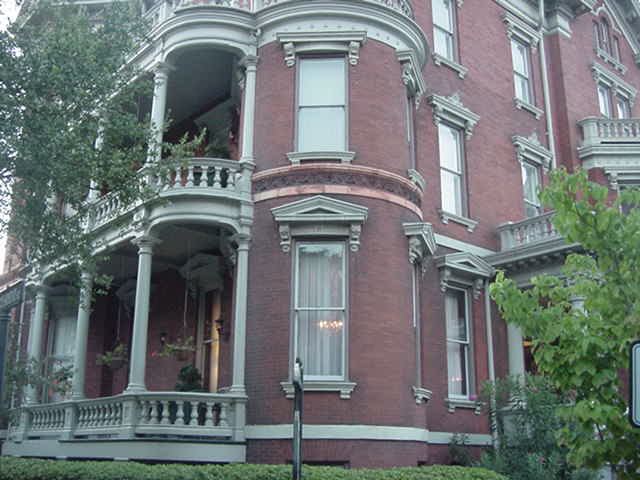 Columbia Square: The Kehoe House
Red brick and terra cotta, built for William J. Kehoe, founder of Kehoe Iron Works. DeWitt Bruyn, architect. Mr. Kehoe, an Irishman, was the father of nine children. When the eldest daughter and her five children came home to live, Mr. Kehoe often packed up rosary and newspaper and climbed to the cupola (long since rotted away) for respite. The mood of the house is Romantic Revival, and there's handcarved oak woodwork inside, plus twelve marble mantles. Long a haven to the weary, Kehoe House was once a funeral home and is now an inn. 123 Habersham Street. Now an elegant restored Bed and Breakfast.

One of the many haunting stories of the house is of Kehoe's twin children who died in the house and supposedly haunt the second floor. The story has two versions of their deaths: One version has them dying at birth; the other has them dying while playing in a chimney in one of the rooms. If you go through the house and look at the chimneys, they're all blocked up and are decorated with carvings of angels, making the second version sound a little more plausible. Guests on the second floor have claimed to hear children's laughter and footsteps running down the hall.