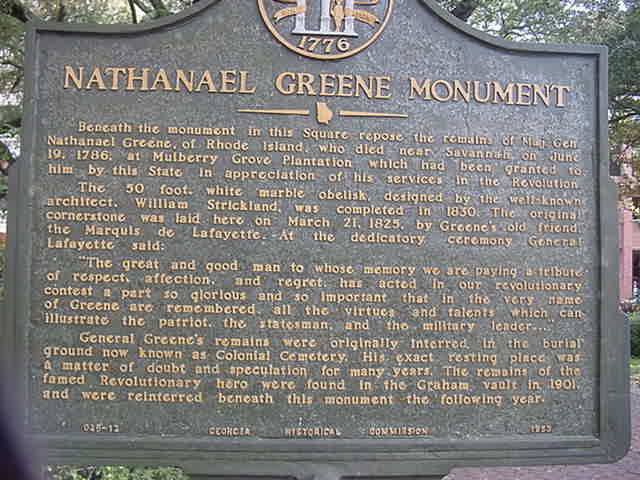 Johnson Square Nathaniel Greene Memorial
The Plaque reads: Beneath the monument in this Square repose the remains of Maj. Gen. Nathaniel Greene of Rhode Island, who died near Savannah on June 19, 1786 at Mulberry Grove Plantation which has been granted to him by this State in appreciation of his services in the Revolution.

The 50 foot, white marble obelisk, designed by the well-known architect, William Strickland, was completed in 1830. The original cornerstone was laid here on March 21, 1825, by Greene's old friend the Marquis de Lafayette. At th dedicatoryceremony General Lafayette said: "The great and good man to whose memory we are paying a tribute of respect, affection, and regret, has acted in our revolutionary contest a part so glorious and so important that in the very name of Grene are remembered all the virtues and talents which can illustrate the patriot, the statesman, and the military leader..."

General Greene's remains were originally interred in the burial ground no known as Colonial Cemetery. His exact resting place was a matter of doubt and speculation for many years. The remains of the famed Revolutionary hero were found in the Graham vault in 1901, and were reinterred beneath this monument the following year.
...quoted from the monument plaque