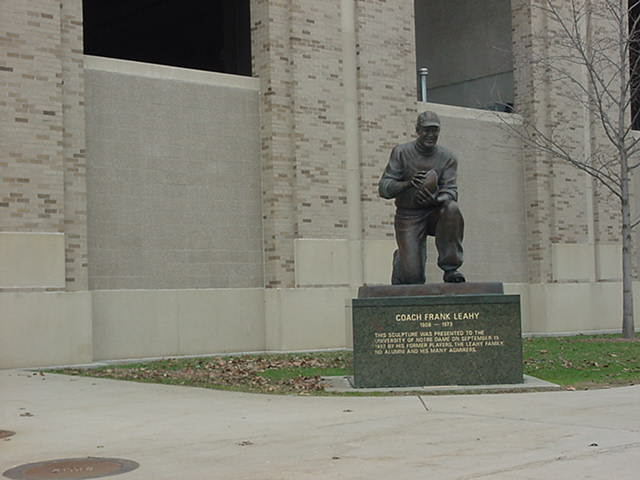 Text on this statue reads: "Coach Frank Leahy, 1908 - 1973 This sculpture was presented to the University of Notre Dame on Sept. 19, 1997 by his former players, the Leahy family, ND alumni and his many admirers."

"Frank" (Francis W.) Leahy
b. Aug. 22, 1908, d. June 21, 1973
Leahy played tackle at Notre Dame in 1929 and 1930 but suffered a torn knee cartilage early in the 1931 season, ending his playing career. It was actually good fortune, for Coach Knute Rockne liked Leahy, sat next to him on the bench, and shared football knowledge with him. When Rockne had to go to the Mayo Clinic for an operation after the season, he took Leahy with him for his knee operation and they shared a room for two weeks.

After graduating in 1932, Leahy became line coach for one of Rockne's former players, "Sleepy Jim" Crowley, at Fordham University. There he forged a powerful line that was christened the "Seven Blocks of Granite."

He was rewarded with the head job at Notre Dame in 1941, and he proceeded to compile a record that would have made Rockne proud. His first three teams won 24 games while losing 3 and tying 3. Leahy shocked some long-time fans by scrapping the shift from the T into the Notre Dame box in favor of the new T formation, but he liked the scoring possibilities of the T and he got the results he wanted.

After spending two years in the Navy during World War II, Leahy returned to Notre Dame in 1946. In his first four post-war seasons, the school won 36 of 38 games, with 2 ties. Then came a three-year slump during which the record was 18-8-3.

In Leahy's final season, 1953, Notre Dame won 9 games and tied 1 without a loss. He collapsed because of a pancreas attack at halftime of the Georgia Tech game and announced his retirement on January 31, 1954.

A hard working perfectionist who stressed fundamentals, Leahy was also an inspiring speaker from the standpoint of his players, but he was known to sportswriters for his often stilted speech. He once summed up his team's prospects by saying, "Notre Dame hopes to field a representative aggregation."
College Football Hall of Fame

Return to the main page of my Notre Dame University pictures