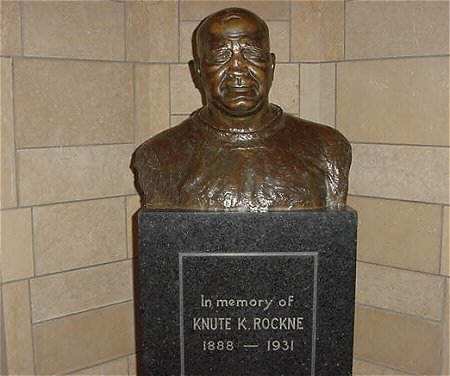 The Fighting Irish have given the sport its most famous coach, Knute Rockne "Win one for the Gipper". During Rockne's 13-year coaching tenure here, the Irish won six national championships, the 1925 Rose Bowl, and had five unbeaten and untied seasons.

Knute Rockne was born in Voss, Norway, on 4th March, 1888. When Rockne was five years old his family emigrated to the United States and settled in Chicago.

In 1910 Rockne entered Notre Dame where he excelled at football and athletics. By 1914 he was teaching chemistry and football, becoming head coach in 1918.

Rockne was an outstanding football coach and changed the emphasis from physical brawn to pace, elusiveness and ball handling. His strategy was successful and Notre Dame were undefeated in 1919, 1920, 1924, 1929 and 1930. During the 13 years he was head coach, Notre Dame only lost 12 matches.

Knute Rockne died on March 31, 1931, when his aircraft crashed into Kansas farmlands while on the way to Los Angeles.

Return to the main page of my Notre Dame University pictures